Hmm. I think the point they're trying to make is that the BBC needs to have a show that highlights the top selling songs in the country (I was going to say records but in these days of downloads and MP3s that's showing my age - and my granddad status) But whenever I think of Top of the Pops I think of singers miming, wide-mouthed youngsters cavorting on the dance floor and inane comments from smart-arsed presenters.

When I first began watching the show in the early 1970s it was the glam-rock era. Slade, Sweet, T-Rex - all superstars. Then there was Gary Glitter singing Do You Wanna Touch Me and Do You Wanna Be in My Gang? Now, three decades on, we all know what that was about...

I know in the years just before its demise in 2006 TOTP was clawing back some credibility with more and more acts performing live and the presenters just introducing the acts without the need for babbling on. But taking it back to our screens would be a step back. In more primitive times, the show was the only place to see bands perform hit songs on the small screen. Nowadays the internet and multi-channel satellite television means there's no need for people to wait until a Thursday or Friday evening for half an hour of acts miming their way through their Top 20 hit.

A sign of the times certainly. But not necessarily a bad one.
at October 16, 2008

Email ThisBlogThis!Share to TwitterShare to FacebookShare to Pinterest
Labels: Top of the Pops

The 'Ting Tings?'
Dearie me, I canny imagine what they sound like! 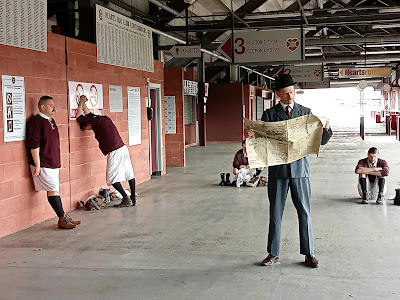